Cats like their reputation for being ‘mysterious’, but one thing that you’ll see with most cats is that they absolutely love bread… sometimes even TOO much. Naturally, you’re probably wondering, can cats eat bread?

Cats can eat bread, but you really want to regulate their amounts. Bread is high in carbs and calories and you also need to factor in the yeast. Bread expands in your cat’s stomach, like it does with us, so too much can make your cat feel bloated and worse – that yeast can convert into dangerous ethanol!

Your cat can still have a little bread, of course, and we’re going to cover the subject in detail so that you have the information that you need. We’ll tell you more about what it does in their tummies, why sourdough is a ‘no-no’, and more. Let’s take a look at bread’s and it’ place in your cat’s diet!

What happens if a cat eats bread?

When a cat eats bread, the bread will expand in your cat’s tummy much like it would with ours, and your feline will feel full. What happens next, however, depends on the amount of bread ingested and your cat’s stomach. Some cats feel fine after eating bread and can’t seem to get enough, while others won’t feel well at all.

The biggest problems are that the bread expands and that the yeast in the bread can convert to ethanol, a dangerous alcohol. While the risk is much higher with raw bread dough (which should be off the menu), this can happen with any bread, and that’s where you have a problem.

Some cats may experience a tummy ache, but constipation, vomiting, and diarrhea are also a possibility. There’s also a mater of calories. Just one slice of bread has anywhere from 80 to 100, which is quite a lot considering that your cat usually eats around 250 calories a day.

As treats should only make up 10% of their diets, you’ll need to be a bit stingy with the bread where your cat is concern and keep any given amounts small. 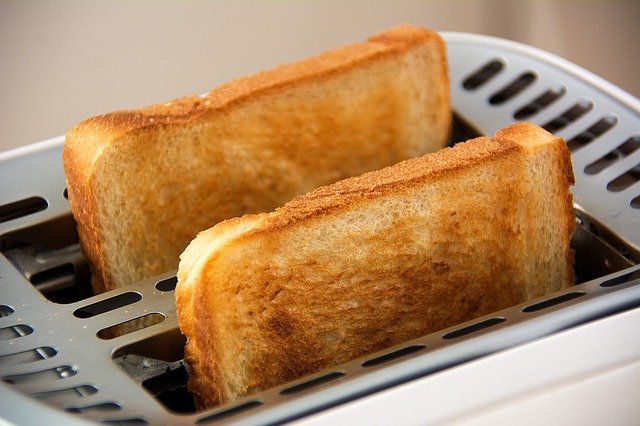 Why is my cat obsessed with eating bread?

Cats seem to love the taste, some so much that they’ve been known to tear their way into the wrapper so that they can eat as much bread as they like. This isn’t good for them, of course, so you might want to consider sticking your bread in the refrigerator or getting a bread box, preferably with a child-proof lock.

Obsession with bread may also be a sign of a nutritional deficiency, however, so if this bread obsession seems to have come out of the blue, then you might want to consider their diet or even better, bring your cat in to the vet.

Parasites such as worms can drain the nutrition out of whatever your cat is eating and overeating or sudden obsession with certain foods might just be a big, red flag that you’ll want to pay attention to. So, consider bringing your cat in for a quick checkup, just to rule this out early.

Your cat’s love of bread might be completely genuine and innocent, but it never hurts to check.

How much bread can I feed my cat?

Before we get into the actual bread portions we wanted to give you a quick reminder – no raw bread dough. Uncooked yeast is very dangerous for your cat and the effects are similar to alcohol poisoning in humans, so just to be clear – bread dough is a no-no.

That said, you can feed your cat cooked bread, as the yeast part of the equation is minimized, but you want to keep the amounts small because it can make your cat feel bloated and it’s chock full of carbs and calories.

Your cat won’t like this, but as far as their ‘allowed’ portions, it’s best to limit the amount of bread your cat gets to one cube of bread, about the size of your ‘pinky’ fingernail. There are simply way too many calories in bread and eventually it’s a recipe for feline obesity if you aren’t careful.

The best defense is to keep portions very small by following the 10% rule. Treats should only be 10% of your cat’s daily caloric intake. If you can stick to that, your cat’s health will be all the better for it.

Can my cat have some of my breakfast toast?

When you’re eating breakfast, you’ve probably gotten used to the attention that you’re sure to be getting from your feline friend. Cat’s see and smell that breakfast and, of course, they want a piece! Is it okay if they have a little toast?

A little toast, even with a small amount of butter, is fine, and you could even put a tiny amount of scrambled egg on it. Just don’t give your cat any toast with jelly or jam on it unless you’ve read the container. This is because you need to make sure that grapes weren’t involved in making the preserves.

This should be listed on the container, so don’t worry, but you need to be sure to check, as grapes in any form contain a chemical called tartaric acid that can be lethal to cats and dogs. Provided that the jelly or jam wasn’t made with grapes or any other fruits that are toxic to cats, then a little on toast is okay.

Say ‘no’ to Sourdough

One popular bread that you want to watch out for, where your kitty is concerned, is sourdough. Sourdough is delicious, but has more yeast than most other breads, and so it’s best to simply avoid giving this to your cat.

It brings us back to the ethanol risks, really, which are best avoided. Too much yeast converts in your cat’s body to ethanol, which can be deadly in high enough amounts. While your cat will smell it and might have a few things to say on the subject, it’s best to put your foot down and avoid giving them any.

Some closing comments on bread and your cat

As with anything, moderation is going to be key. Most cats can eat a little bread without feeling uncomfortable, but if you notice any signs of stomach discomfort or worse in your cat, then it’s best to check with your vet and you may want to take bread off of the menu.

That said, the recommended amount of ‘one pinky-nail sized cube’ should be perfectly find for your cat and too small of an amount to make them feel poorly. So, if your cat wants bread, then you can indulge them – just stick to small portions which are better for their tummy and their overall health!