People often wonder if it’s safe for their cats to eat fish. The answer is both yes and no. While most cats can eat fish without any problems, there are a few types of fish that may be harmful to them.

In this blog post, we’ll explore the different types of fish that are safe for cats to eat and those that aren’t. We’ll also look at some tips for feeding your cat fish safely.

So, whether you’re looking to add a little variety to your cat’s diet or you’re just curious about what’s safe for them to eat, keep reading! 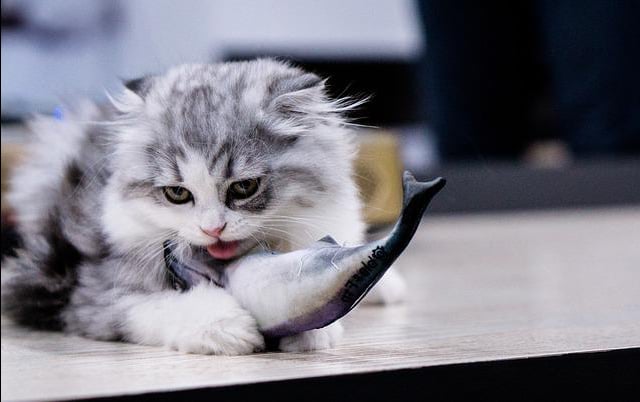 Canned fish is high in sodium, which can be harmful to cats if they eat too much of it. It’s important to look for canned fish that is labeled “low sodium” or “no salt added.”

Fresh fish is the best option for cats, but it must be cooked properly. Raw fish can contain bacteria that can make your cat sick though you can feed raw fish to your cat if you freeze it for 24 hours first to kill the bacteria.

When feeding your cat fish, be sure to remove the bones and possibly the skin. Fishbones can splinter and cause digestive problems or even puncture your cat’s intestines. As for the skin, it can be high in fats but is generally OK. 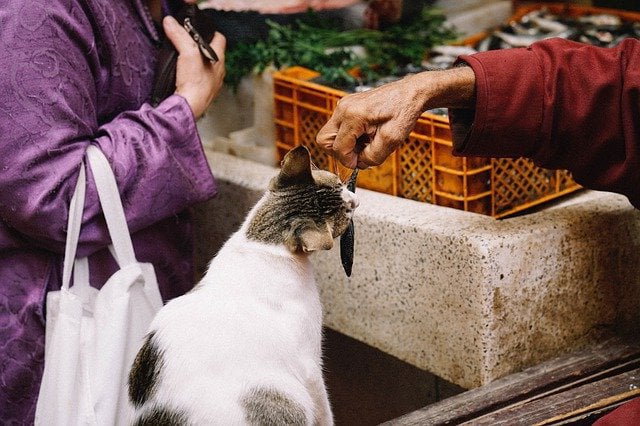 Do Cats Eat Fish in The Wild?

No, very few cats in the wild catch fish. Domestic cats, however, are often fed fish as part of their diet.

Cats are obligate carnivores, meaning that they require animal protein to survive. Cats in the wild get most of their protein from small prey–like mice or birds. Fish make up a very small percentage of their overall diet.

The domestication of cats has led to them being fed more fish than they would ordinarily eat in the wild, which is why so many domestic cats love to eat fish. 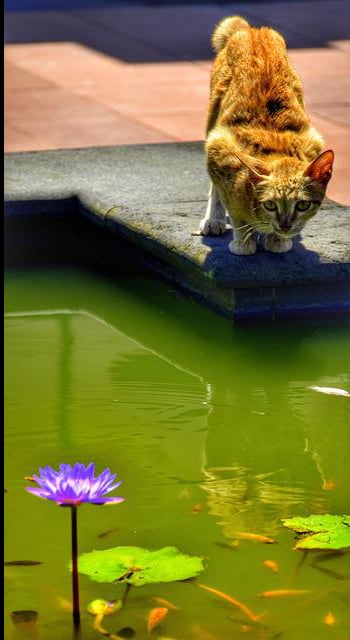 Benefits of Fish for Cats

Fish is a great source of protein for cats. It’s also a good source of omega-3 fatty acids, which have numerous health benefits.

Omega-3s can help to improve your cat’s skin and coat, reduce inflammation, and keep their joints healthy. They can also boost cognitive function and help to prevent certain diseases.

While most cats can benefit from eating fish, it’s especially important for senior cats and those with certain health conditions. 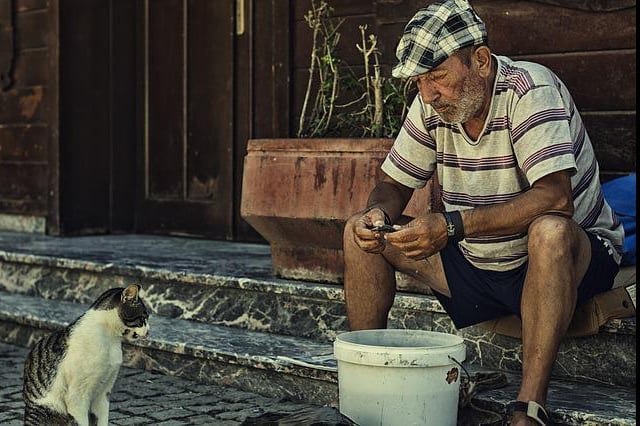 Risks of Fish for Cats

There are a few types of fish and fish parts that can be harmful to cats. These include: 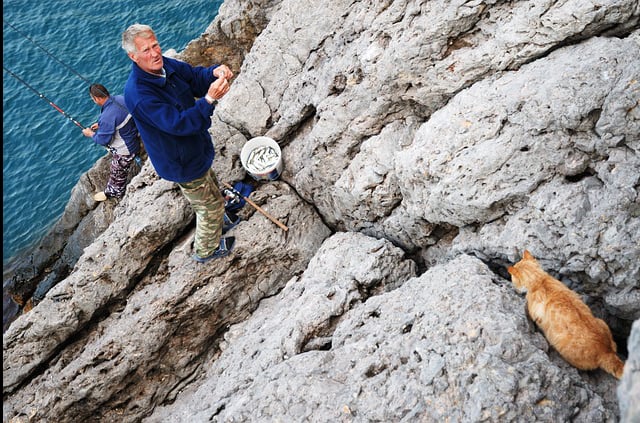 Hyperthyroidism in Cats Due to Fish

There is a condition called hyperthyroidism that has been linked to the feeding of certain types of fish flavoring to cats (source). Hyperthyroidism in cats causes an overproduction of thyroid hormone, which can lead to several health problems.

The symptoms of hyperthyroidism in cats include weight loss, higher metabolism, increased appetite, increased thirst and urination, restlessness, and more. Even though their hungrier, the increased metabolism causes them to lose weight.

The study didn’t blame specific flavors but rather found a link between cats that preferred fish flavors and increases in hyperthyroidism. Preferred is the operative word here. It could be something other than the flavor entirely that causes it.

Cats love the taste of fish, so it’s not surprising that many commercial cat foods contain fish. Many wet cat foods are flavored with fish.

While there are some benefits to feeding your cat fish-based cat food, there are also some risks. The main risk is mercury contamination.

Most commercial cat foods that contain fish don’t use the highest quality fish. They use fish parts that weren’t suitable for human consumption.

By itself, this isn’t a problem as commercial cat food has been pasteurized to be safe. Just be mindful of cat food with any fish that might pose a mercury risk like tuna.

These microplastics can be ingested by fish and other marine animals. There is some evidence that they can also accumulate in fish higher up the food chain.

While there is no evidence that microplastics are harmful to cats at this time, it’s something to be aware of if you’re feeding your fish to your cat.

While not as common as other allergies, some cats can be allergic to fish. The most common symptoms of a fish allergy in cats are itching, redness, and swelling; and excessive licking or scratching. If your cat is having any of these symptoms, it’s important to take them to the vet.

What’s the Best Type of Fish for Cats?

If you’re going to feed your cat fish, the best type of fish is wild-caught and fresh (or frozen). Salmon, sardines, and herring are all good choices of fish for cats.

Low-sodium canned fish in the water is good as well.

Avoid tuna fresh, canned, or frozen as it contains higher mercury levels. The same is true for sharks and other fish higher up the food chain.

When feeding salmon to your cat, make sure it’s cooked properly. Salmon can contain bacteria or worms that can make both you and your cat sick.

It’s also important to remove the bones before feeding salmon to your cat. Salmon bones can splinter and cause an obstruction or perforation in your cat’s digestive tract.

Is Tuna Bad for Cats?

Tuna has a lot more mercury than other fish, so it’s not advised to give your cat this. Even for people, we’re advised to eat no more than one can of tuna per week per adult.

Cats are 1/15th the size of a typical human so their recommended tuna would be 1/15th of a can per week which is a bit ridiculous to even attempt. Another way to view this is to give them a bit of tuna every 15 weeks (3-4 months) max.

If you choose to feed tuna to your cat, make sure it’s low-sodium canned tuna in water and that you remove the bones before feeding it to your cat and do so very sparingly.

Yes but raw fish can contain harmful worms, eggs, or parasites and should be frozen for at least 24 hours before serving.

Freezing kills worms and worm eggs but doesn’t kill other pathogens like bacteria. So, it’s important to cook the fish properly before feeding it to your cat.

No. Fish bones can splinter and cause an obstruction or perforation in your cat’s digestive tract.

Is it Safe to Give My Cat Canned Fish?

Only if you give low-sodium canned fish that isn’t oil-based or from a high mercury fish like tuna.

Canned fish packed in oil contains more calories which if eaten regularly can cause pancreatitis or obesity and other related problems in cats.

Yes, cats can eat fish oil. Fish oil is a good source of omega-3 fatty acids. There isn’t a need to give your cat fish oil as they will get all the nutrients they need from a regular wet and/or dry cat food diet.

Can Cats Eat Fish Every Day?

Feeding your cat fish every day isn’t necessary and could lead to health problems down the road.

A good rule of thumb is to feed your cat fish once or twice a week at most and stick to their normal cat food the rest of the time.

How Much Fish Can I Give My Cat?

The amount of fish you feed your cat will depend on their age, weight, and activity level.

Cats can eat fish but there are some things you need to keep in mind. Feed them fish no more than once or twice a week, remove the bones, and cook the fish properly. It’s also important to avoid giving your cat tuna as it contains high mercury levels.