We all know that chocolate is not good for animals, but we tend to forget this until the worst happens. If your dog ate chocolate & there’s blood in the stool, then don’t panic, but you’ll want to act fast to get them the proper help that they need.

While chocolate toxicity often causes blood in their vomit, occasionally blood in the stools will show instead. Theobromine and caffeine in the chocolate are quite toxic and after they are digested, they can be reabsorbed in the bladder, and the resulting irritation from this cycle may show blood as a symptom. Get your vet involved immediately if this occurs.

Today we’ll tell you a little more about what chocolate does in your dog’s body, which chocolates are the most and least toxic, and what you can do. Read on for important information about chocolate and your dog – we hope that you never need it, but it is definitely something that you need to be prepared for! 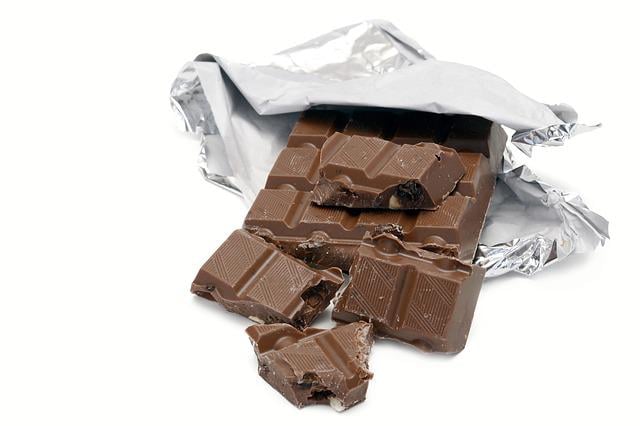 Blood in the stool is not a typical symptom with dogs, with blood in the vomit being the most common symptom that involved bleeding, but blood in the stool can and certainly does occur. We actually know a lot about these toxins because they have medical applications when isolated from chocolate and other sources.

Both the Theobromine and caffeine in chocolate are chemicals which are used in small amounts by veterinarians for benevolent purposes, such as dilating blood vessels, as a muscle relaxant, and to stimulate the heartbeat.

Still, anything that disturbs your dog’s digestive tract can potentially cause bleeding issues and there is always the possibility that the caffeine and Theobromine are exasperating bleeding from something else that was ingested. In any case, if your dog has eaten chocolate and has blood in their stools, you need to take them to the vet immediately.

With chocolate toxicity, some other symptoms which may manifest are as follows:

Why is chocolate toxic for my dog?

Chocolate is made from a bean called the Theobroma Cacao, which is basically roasted-up and heavily sugared to give us the distinctive taste that we know as chocolate. As a side-effect of the process, the chemicals Theobromine and caffeine are produced, and while this is harmless for us it is very toxic to your dog and most other animals.

Luckily, in the U.S., a lot of our chocolate has a lower content of actual cacao in it, as milk chocolate is one of our national favorites and has a lower percentage of cacao content than many imported varieties.

That said, there’s still quite enough to get your dog sick if they eat enough of it, so you’ll want to get in the habit of putting it out of reach or completely away when you can’t watch it. If your dog eats enough, it could cause a cardiac arrest, coma, or even death, so it’s vital to keep it away from your dog.

The worst part about Theobromine ingestion is that it cycles in your dogs system, so that once it reaches the bladder it is reabsorbed in the body, though diluted a bit, for a period of 72 hours, possibly more, so your vet’s assistance will be crucial in minimizing the effects and helping to get it out of your dog’s system.

How much chocolate is dangerous for my dog?

Since the cacao content is the indicator of how toxic the various forms of chocolate will be to your dog, we should take a closer look at which common chocolate varieties are the most and least toxic. The most common chocolates found at home include the following:

So, white chocolate safe for dogs?

To be clear, while white chocolate is the least poisonous, it is still a poison for your dog. While the reduced amounts of Theobromine mean that your dog would have to eat a lot of it to reach life-threatening levels of toxicity, that doesn’t mean that it’s okay for them to eat it.

Some white chocolate even contains cocoa chunks in it, which will increase its overall toxicity, but at the very least it might give your dog diarrhea or an upset stomach unless they are very large and the amount consumed was tiny. As such, it’s best to simply keep it away from your dog.

What do I do if I can’t reach my vet?

If you are unable to reach your vet for any reason, don’t panic. You can call the ASPCA Poison control line toll free at (888)426-4435 to get help with your dog immediately while you are trying to locate an alternate veterinary option.

Be sure to post this number on your refrigerator so that you’ll always have it and as an added precaution, a 24-hour local emergency vet’s contact info is also quite handy in a pinch.

While we hope that you never need this information, having it on the refrigerator where you can find it easily can make all of the difference when your dog is sick and you’re in a panic, so be sure to put these numbers up and you’ll always have them ready in case the worst occurs!

Some final words on chocolate toxicity and bleeding

While your dog is more likely to have blood in their vomit from chocolate ingestion, it can and does sometimes happen from the opposite end, but the important thing is not to panic. Contact your vet or the ASPCA poison control line and try to determine which type of chocolate your dog ingested.

Once you get your dog to the vet, they will likely use an iv and medications to induce vomiting, or charcoal to bond with the chocolate in your dog’s system so that they can stop it from recycling and making the toxicity worse.

So, keep a level head and get your vet involved immediately — with a little luck and treatment, your dog will be okay, but you need to get them help as soon as possible!