Are you starting to feel panic setting in now that you know for sure your beautiful German Shepherd dog (GSD) is indeed pregnant? First of all, take a deep breath.

Once you’ve calmed down a bit, take a look at the answers to these common questions that pet owners have when they’re in your shoes.

How Long is a German Shepherd Pregnant (Gestation Period)?

According to dog expert Anna Burke, German Shepherds are normally pregnant for 63 days. While there’s a chance your GSD could give birth to preemies, 63 days is the normal gestation period following conception. That comes to just under 9 weeks.

How Many Puppies Can A German Shepherd Have?

GSDs can have 2 litters per year starting at a young age and going through 8 years of age. This means that over her lifetime a German Shepherd will produce on average 56 puppies.

Purebred German Shepherds with a pedigree normally have fewer puppies due to their genetic makeup. An extensive study conducted by the Norwegian Kennel Club in 2010 found the mean litter size for GSDs is 5.4 dogs.

Of course, you won’t be getting four-tenths of a dog out of the equation, but this is still a good estimate.

German Shepherds normally have only two fertile days, and exactly when they mate during that time has a lot to do with how many puppies a single litter will yield. The age of your GSD, her general health, and whether she’s been properly fed will also have an impact.

A white German shepherd, helpfully located in White County Indiana, gave birth to 17 puppies in 2015. According to local news teams, 14 of the puppies survived.

Keep in mind that this is very rare, so you normally won’t have to worry about anything even close to this size.

Unfortunately, there is a possibility that your GSD could produce stillborn puppies. Proper nutrition, care, and avoidance of any trauma to your dog during the gestation period will help to drastically reduce the risk of stillborn puppies.

Pregnant German Shepherds have certain nutritional needs that aren’t met by standard dog food. Fortunately, more and more commercial suppliers actually have collections of dry and wet food out on the market that satisfy their nutritional requirements.

See example below from Royal Canin made specifically for German Shepherds. Click on the image to check the current price and availability on Amazon.

Regardless of what kind of food you give your dog, you don’t want to go around taking a chance with their nutrition. It’s easy to think that canine nutrition is like human and can be fixed up with certain pills, but it’s way more complicated.

If worse comes to worst, then you’ll want to ask your vet or a professional breeder for advice. Purebred German shepherds in particular tend to be kind of fussy when it comes to what they need to eat during this special time. 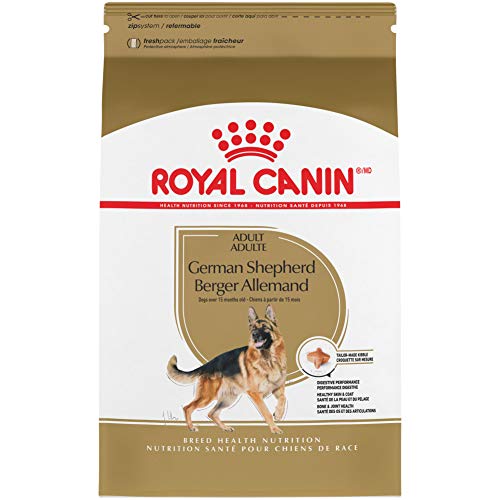 Since calcium is so important for pregnant mammals, you might be tempted to supplement your German Shepherd’s intake. Plenty of vets actually advise against this practice!

According to Ryan Llera (BSc, DVM), dogs who receive calcium supplementation during pregnancy could be at an increased risk for a medical condition called eclampsia.

It might surprise you to learn that this is actually a bad idea in a lot of cases! One study at Mississippi State University found a link between this kind of feeding behavior and milk fever.

As you may have guessed, that’s the same condition as eclampsia.

Can I Play with a Pregnant German Shepherd?

Not only can you still play with your dog, you probably still should! Pregnant German shepherds need exercise to keep up their strength and maintain their health.

You’ll certainly want to avoid anything that could cause trauma to their lower regions and anything hard strikes on the belly. Don’t rile your dog up so much that they run around and cause potential damage to the birthing area.

This could be a major issue depending on how far along your dog is and how healthy she is otherwise.

How Do You Help a Birthing German Shepherd?

German shepherds are larger dogs, so it might be a bit easier for them to give birth than for many smaller breeds. That being said, your pregnant pooch is still going to need a little help along the way.

Make sure your dog is comfortable during the first stage of labor. Keep in mind that this can last for up to 18 hours, so you don’t want to put her somewhere that she can be easily disrupted.

Once she moves into active labor, contractions will increase. You’ll start to see fluid come out that your dog might lick.

While it might be concerning, many mothers like to clean their puppies and it’s technically normal. On the other hand, you’ll need to tend to any puppies that a birthing mother refuses to.