Are you tired of your dog trying to jump over the fence and into your neighbor’s yard? Check out our list of ways you can calm down your pooch and keep them from leaping!

Why Do Dogs Jump Fences?

Dogs often jump fences because they haven’t bonded with you and your family. In some cases, they might just be bored.

If you’re traveling or leaving the house a lot, then you’re not going to become buddies with your dog. Puppies sometimes jump even if they’ve bonded just because they’ve got so much energy.

Assuming these aren’t the problems, though, an overwhelming majority of dogs jump because they’re interested in what’s on the other side of that fence! 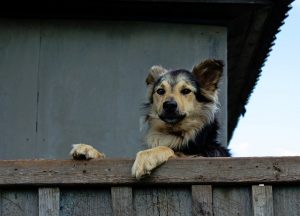 What Can You Do to Stop Dogs from Jumping?

Sporting breeds may have a sort of hardwired instinct to jump. Giving them a regular task to perform can help with this.

A simple game of fetch might be enough to work this instinct out of them!

Pet owners who have smaller dogs that are properly bonded won’t be able to deter them so easily, though. You can usually train a dog to stop using the same methods that you’d use to teach them anything else.

However, you’ll need to hide exciting stimuli from outside if the reason they’re trying to jump the fence is related to something neat on the other side.

Blocking Out Things that Excite Dogs

Other dogs and even people on the other side of a fence can be a great incentive for a dog to jump. One easily way to take this away is to plant trees or shrubs in the front of your fence.

That can block out the smell of other animals as well as the sight of them.

Some pet owners have also had good results installing privacy fence slats to keep their dogs from seeing things on the other side. This is an easy DIY project that you can do with materials you find at a regular hardware store.

Some dog owners have tried to put things up at the top of their fence to act as negative reinforcement and discourage their dogs from jumping.

The trouble is that this doesn’t normally work. Others have tried e-collars or other corrective devices to teach their dog not to keep trying it.

Many dogs may not respond to these methods. If it’s possible, then you can increase the fence’s height instead of booby trapping it.

Eventually, a dog will stop trying to jump a fence if they simply figure out that it’s too high for them.

Obedience training is a great idea for dogs that just don’t seem to learn any other way. You can take your dog to a professional, but those who do might except to pay quite a bit of money for their services!

Use the same healthy training methods that you would when teaching a dog anything. If you’re a little lost, then check out this video from a dog rescue expert:

If you can’t raise the height of your fence, then you might still get some success out of building a simple deterrent system. Some owners make a so-called L-footer by placing upside down fencing at the top of their structure.

Once your dog finds out that there’s a barrier, they may very well stop.

You could also put an obstruction, like a table or a line of potted plants, in front of the fence. Assuming your dog doesn’t knock it over, it can be an effective obstacle.

Putting Up a Second Fence

When nothing else works, you can try putting up a smaller second fence in front of your main fence.

In theory, dogs can clear a second fence. However, they’ll never be able to get a running start with that additional one in the way.

As a result, they won’t ever be able to clear your main fence no matter how hard they try.

Some residential communities won’t allow you to put up this kind of double fence, so check the rules before you do any construction.

What are Jump Harnesses?

Dog training experts have invented a device that solves the jumping issue by restricting the movement of your dog’s hind legs. While these work well, it shouldn’t ever be used as a permanent solution.

You might want to try one as a temporary fix while you’re training your dog. They also work to stop dogs from jumping on furniture and counters.

If you have a chain link dog fence, then you can install a coyote roller on the top of it so your dog won’t be able to clear it.

These are rotating aluminum drums that fit on the tops of fences and prevent animals from climbing by giving them nothing to stand on. They’re great if you live in a rural area too, since they’ll keep pests from climbing into your yard as well.

In fact, those who are lucky enough to live near a farming supply place might want to look into pest-exclusion fencing in general. There’s a whole world of fences designed to keep much bigger animals than dogs in place humanely without doing them an ounce of harm.

Does Cat Netting Work for Dogs Too?

So-called cat netting is a mesh that keeps cats and other smaller animals from getting around fencing. It’s a great solution for smaller dogs.

Pet owners with larger animals might not see much of a difference, but this is a really cost-effective way to deal with the jumping problem if your dog is relatively light.

However, any sort of netting can also help to block their visibility. This can, in turn, stop any dog from jumping since they won’t have any incentive to try and get over the fence. 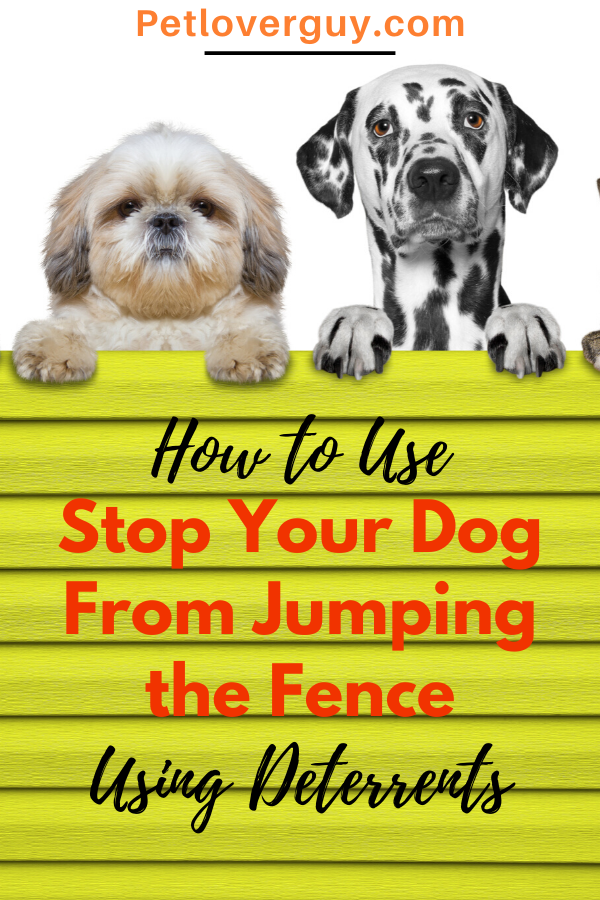