You’ve invested a ton of money into a techie solution to keep your dog from barking or digging. All of a sudden, your dog shock collar stops working!

Don’t get too worked up about the situation. In an overwhelming majority of cases, you can fix it yourself easily.

1. Either the Transmitter or Receiver is Switched Off

It sounds unbelievable, but the most common problem is caused by users not turning both the collar and remote on. Before you do anything else, check that you’ve switched them on and they’re both charged up.

Modern shock collars usually have a lock mode, which keeps you from applying correction to your dog by accident. Make sure this isn’t on by mistake.

If your charger isn’t making good contact with the unit itself, then it might appear to suddenly stop working. Check to see if the charger port on the collar’s shock module got dirty.

In that case, you can usually work the unit back together again the right way. Check out this easy way of doing it:

Should none of these steps work, you’ll want to check the charger itself. Sometime they need to be carefully reinserted into the wall to get them to work.

All dog fur isn’t created equal. Most shock collars include longer terminals on the underside of the module, which is best for longer haired dogs.

You can usually adjust them a little bit by twisting them to make them go up or down. If they’re not fitted right, then your dog won’t receive any level of correction when you use the collar.

Try adjusting the straps as well. If you still can’t get it to work, then try the fitting method shown in this video:

4. Strap or Clasp Have Broken

When the collar’s clasp breaks, you usually have to replace it. If you’ve ever replaced one on a normal collar before, then the process is exactly the same.

There’s a small ring that holds the belt in place. You can fish the old strap out and put a new one in without compromising the shock module.

Take a look at how this seemingly complicated fix can actually be pretty easy:

5. Correction Level is Too Low

In most cases, you want to set the correction level as low as possible. Owners of bigger dogs might find that their pets can’t feel a small shock, however.

Very gradually raise the shock level until you find something that works. You don’t want to dial it up suddenly.

How Do You Reset a Dog Shock Collar?

Every model does things just a little differently. If your collar has a reset button, then you probably need to push and hold it.

Otherwise, try turning the collar receiver off. Hold the on button until the receiver light burns solid.

Eventually it will turn off, and you can release the button. You may then have to press the continuous stimulation button on the remote to get the unit to work again.

This isn’t necessarily a universal technique, but it works on a large enough number of collars. Don’t forget to check the little pamphlet that came with yours!

How Do I Know if My Shock Collar is Working?

Some people suggest testing the collar on your own fingers. If you have any kind of heart condition, then this is most inadvisable!

A better idea is to switch it to audio correction mode. Take the collar off your dog and then apply correction.

It should make a beeping tone. You could also try putting it on vibration mode and testing it since people can’t hear the tones made by some collars.

Do Shock Collars Hurt a Dog?

According to Dr. Randall Lockwood of the Humane Society, pet owners that use equipment from responsible manufacturers greatly reduce the risk of any injury from a shock collar.

Keep in mind that you need to use the collar in a manner consistent with its labeling. One study published in the Journal of Applied Animal Behaviour Science found that dogs didn’t show increased stress levels after getting used to the concept of shock controls.

Way back in 1983, scientists published a study in the Journal of Experimental Psychology that suggested avoidance-learning methods could actually make dogs safer. If they learn not to be aggressive, then they won’t get hurt trying to do something dangerous.

What to Do if Your Shock Collar Won’t Turn On

Try setting the receiver in a sunny place where your pet can’t get to it. Moisture from dog slobber and the ground can sometimes temporarily short these out.

You can also try taking the batteries out and drying the unit with a paper towel. Make sure to clean the outside as well.

Some pet owners have suggested that leaving the batteries out of the unit and putting them back in later can actually get an uncooperative shock collar to turn on again!

What to Do if Your Shock Collar Isn’t Charging

Assuming you’ve also tried the suggestions in the last step, you might want to just wait. Give the collar some time to charge.

In some cases, it might take all night to charge a dead battery. Check to make sure the charger’s contacts aren’t bent either.

You might want to replace the charger if you can’t get anything to work. Manufacturers are starting to use standard USB cell phone chargers, so you can try one if you happen to have an extra.

When all this fails, you’ll need to check the batteries. Try opening the module with a screwdriver.

The batteries should have a number directly on them, which makes it easy to order a replacement. 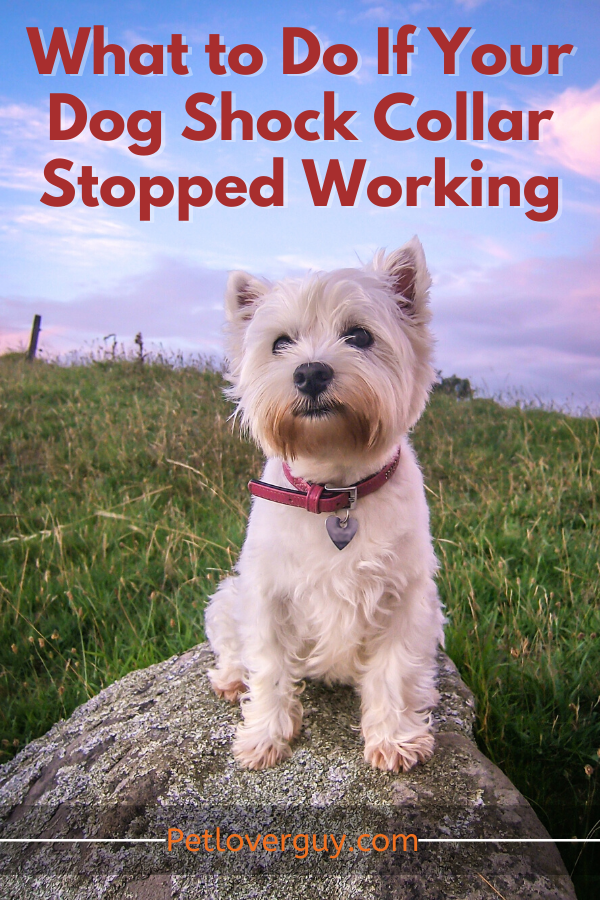