“I’ll have what you’re having’ is a popular phrase at bars in movies and at home when your dog sees you drinking anything at all. They can’t say it, but you can certainly see it in their eyes. So, can dogs drink almond milk?

Unsweetened almond milk is safe for your dog in moderate amounts. Check the ingredients and if they amount to basically ‘water and almonds’, then your dog can certainly have a little. Just make sure that they don’t have Xylitol or other artificial sweeteners and don’t give your dog more than a shot-glass sized serving.

There’s a little more that you should know about almond milk before giving it to your dog, so today we’ll take a closer look so that you can evaluate it for yourself before you make the decision to share your nutty beverage. Let’s talk about dogs, almond milk, and what you need to know about mixing them together!

Dogs can drink almond milk, but should they?

All in all, it’s not so bad for them. When you compare it to other plant-based milks or even regular dairy, it’s got less calories, and that ‘shot glass’ size serving only amounts to 15. Almonds are also a good enough protein source that they’ve made it into a number of dog foods.

You do need to worry about sweetened varieties, however. Xylitol is the big one to watch for, and it’s present in some almond milk brands, as well as other foods you might not expect such as some commercial peanut butters. It is quite toxic for dogs, so you’ll definitely want to check for it before letting them have almond milk.

It does have a lot of fat as well and can upset some dog’s tummies, so even with the shot glass size being safe for most, with smaller dogs or larger dogs that are just getting their first taste, you might want to half that serving and watch to make sure that your dog is unaffected.

As their tummy constitution can vary so much, even with dogs of the same breed and size, a taste test is recommended at the very least just to make sure that all goes well. Once you know that it doesn’t cause any stomach distress, then almond milk from time to time is not a big deal at all. 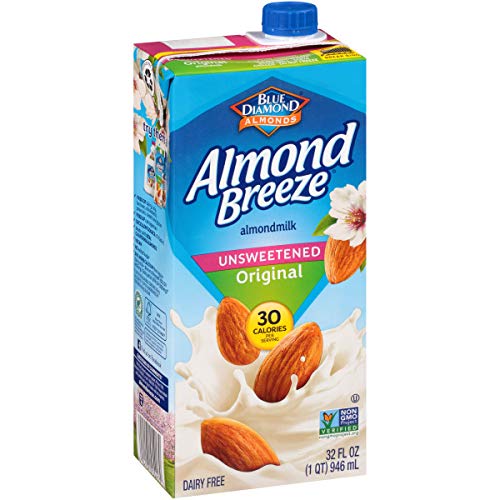 How much almond milk can a dog drink?

A shot glass size for a medium or large dog is fine, with half of that being a better size for smaller dogs. While you could certainly give them more, with the added fats and it’s not really something that you want to give them too much of.

The best way to determine a hard limit is going to be taking the daily calorie intake recommended for your dog and then comparing it to the unsweetened almond milk. Your dog’s daily treats should be no more than 10% of your dog’s daily calories for best results.

As a bonus, moderation with that almond milk means that your dog can have other treats later in the day too, so it’s a compromise that everyone should be onboard with!

What happens if my dog drinks too much almond milk?

Too much almond milk is a recipe for an upset stomach, but vomiting and diarrhea are also a very real possibility. While almond content is added in dog foods, as a drink for dogs it’s still not really something that they would encounter in nature and if they did, most would probably still just drink water instead.

Thankfully, as long as it’s just unsweetened almond milk, you really don’t have much to worry about, even if your dog knocks over the container and manages to drink up quite a lot.

While it’s certainly not recommended for everyday ingestion, it’s basically just proteins and fats, so barring any almond allergies or overconsumption, it’s perfectly okay for your dog to have a little almond milk.

Can dogs have vanilla almond milk, too?

No, we don’t really recommend any almond milk with sweeteners or added flavors. With added flavors, things get a little more complex, and you’d have to sit down and go over the individual ingredients to check them before you could consider letting your dog have some.

That said, if your dog managed to get into some of your vanilla almond milk, it’s unlikely to hurt them unless it’s got toxic ingredients such as Xylitol.

Flavored almond milks do, however, tend to have a lot of sugar and fats so depending on how much your dog managed to get before you caught them, then an upset tummy, vomiting, or diarrhea are quite possibly going to be the result.

Can I also share regular almonds with my dog?

Finally, while unsweetened almond milk is fine, we can’t recommend giving your dog raw almonds. It’s not so much the content, as it is the ‘package’ that it is contained in.

Dogs simply do not digest nuts very well and while they might be tempted by some of the almond varieties with flavor powder, you’ll just have to tell them ‘no’ and perhaps provide an alternative snack that will be healthier for them and much easier to digest.

Dogs just weren’t built for eating nuts, no matter how much they’ll try to convince you otherwise!

Some closing comments on almond milk and your dog

Well, that’s pretty much it in a nutshell (sorry, we couldn’t resist!). Unsweetened almond milk should be considered perfectly fine for your dog, just be sure to moderate their amounts. While the fats and proteins are certainly healthy, like any other foods or drinks the volume is an important factor.

Be sure to check the ingredient list to make sure that Xylitol or other artificial sweeteners are not present and the only recommended almond milk should basically consist of almonds and water. Finally, while almond milk is okay, almost most definitely are not – they’re too hard to digest.

So, be sure to tell your dog the good news! If they want to have a little almond milk with you, then they’ve officially gotten the green light!