Every dog owner has heard a story or two about this phenomenon. A dog’s owner falls ill and death is ‘knocking at the door’, and their faithful dog immediately rushes to their side and resists all attempts by others to make them move. So, can a dog smell death?

Dogs have extraordinary olfactory senses and have been sharing their lives with humans since before recorded history. As such, they’ve developed a catalog of smells when it comes to humans and seem to have a pretty good idea when one becomes gravely ill. While they don’t technically have a concept of death beyond ‘an absence’, they can definitely smell illness.

In this article we’re going to take a look at this amazing ability so that you may better understand how dogs do it and how they react when they sniff-out that something is wrong!

While not all dogs can smell it to the same degree, when it comes to olfactory senses they have definitely won the lottery. Humans have around 6 million olfactory receptors that constitute what we call our sense of smell but dogs? They have up to 300 million of them.

This allows them to sense mood changes or diseases that cause minute changes in the way our bodies, sweat, and urine smell and so they are usually quite aware when their human owner has become very ill.

Not all dogs have this ability to the same degree, however, and even if you train 2 dogs of the same breed to sniff out disease, you can get different success rates. That said, there are dogs that have been trained to sniff out things like cancer in the bladder, lungs, ovaries, and even high blood sugar in diabetes patients.

Technically, it would be more accurate to say that dogs can smell disease, but to a degree that they tend to know when their owner is very ill and needs their comfort and that’s fascinating enough, all on its own! 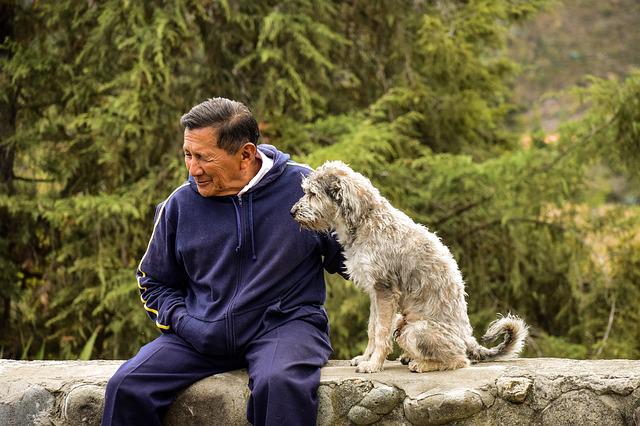 How do dogs act when they smell illness?

Every dog owner has seen this in action, but it’s so natural to a dog’s behavior that many of us don’t really think about it. When you are feeling depressed or even ill, your dog approaches and stops for a moment, raising their snout and then tilting their head to the side as if puzzled.

After a moment, they’re shoving a wet nose on you, nudging you to get your attention. That momentary pause is your dog giving you a ‘scan’ with their nose and smelling a problem. It takes a little concentration and it makes sense, when you think about it.

With their superior sense of smell, the house is filled to the brim with other scents that they need to tune out – much like singling out your friend’s voice at a concert. If you haven’t noticed your dog doing this, then the next time you are feeling poorly we recommend keeping an eye out for it.

Once you recognize the behavior, you’ll spot them doing it all of the time, even if you are just acting differently around your friends or laughing uproariously at something you’ve seen on the TV. Dog’s check us out with their noses, for good or ill – it’s just one of their superpowers.

What kind of diseases can dogs smell?

While they can probably smell more conditions than we have catalogued, we have enough scientific proof that they can smell certain diseases that people actively train dogs for this purpose. Let’s take a look at some of the conditions that we know 100% that certain dogs can smell.

This is the one that dog’s get the most credit for and it’s pretty amazing. Dogs can sniff-out many different kinds of cancers. This includes bladder, lunch, ovarian, breast, prostate, and even skin cancer. With the last, numerous owners have reported having moles that their dogs were obsessed with and some even tried to nibble off of them!

There is a chemical called Isoprene that occurs in our breath when our blood sugar is low and apparently dogs can smell it. They’re good enough at it, that people have trained numerous dogs for this purpose, and the science seems to back up their efficiency in detecting blood sugar changes.

A study done in 2019 took 27 dogs trained for this purpose and found that 81% of the time, they were able to recognize changes in blood sugar in the patients that they were there to sniff. You can read the study here if you would like, it’s definitely quite interesting.

Cortisol and Adrenaline are believed to be the ‘stress factors’ that allow dog’s to tell whenever we are frightened or simply very stressed. That old bit of wisdom that says not to be afraid around dogs because they can ‘smell your fear’ is apparently, if you’ll excuse us for saying it, ‘right on the nose’!

There are actually service dogs out there which are trained to sniff-out Narcolepsy and they can come in quite handy for sufferers of this affliction. While we haven’t isolated what it is specifically that they are sniffing out, we do know that dogs are detecting something and they have been successfully trained to respond.

When an owner of one of these special dogs is about to have an episode, their dog will usually catch the changes in their scent, and they can move in quickly to help ensure that the person has extra support so that they won’t fall down.

Some final words on dogs, death, and disease

While we can’t say for sure that they know death is 100% certain, we CAN say that dogs can sniff out many terminal illnesses and for all intents and purposes, this is pretty close to being able to smell an impending demise!

Various cancers, narcolepsy, low blood sugar, and even good, old-fashioned stress all have chemical signatures that dogs can be trained to sniff-out and loyal creatures that they are, will bring them to your side poste said.

That said, just remember that not all dogs can do this with the same degree of accuracy, so if your dog is suddenly giving you a lot of attention then don’t panic right away – they might just be smelling that bacon you tried to hide from them this morning!