For beginners, drawing animals can be a challenge. But you always have to start somewhere, and you don’t have to be perfect. This is where a quick, focused guide can help you.

Having trouble getting those strokes right? In this article, we’ll show you how to draw a Yorkie. Get your pencils and paper, and get ready.

Realistic or Cartoonish: Which Style Should You Choose?

To the inexperienced hand, puppies could be some of the most testing subjects to draw. Yorkies are one great example of this: how is that endearing fluff supposed to translate on paper?

You can opt for a realistic canine portrayal. You can also choose to adopt a more modern representation. It’s all up to you.

As a beginner, there’s only one productive way to tackle this: find a style for yourself as you go along. You aren’t confined to one specific style. Instead, you could branch out and experiment with different styles.

Realistic Yorkie How To Video

Cartoon Yorkie How To Video

It’s Time to Reach For Your Pencil! How to Draw a Yorkie From Scratch

If you’re treading unfamiliar waters, rest easy. This 12-step guide is extremely beginner-friendly. It requires neither extraordinary talent nor expensive supplies. It only requires consistent effort.

Step One: Collect Your Supplies

For a beginner, your supplies kit shouldn’t be too demanding. So to draw a Yorkie, you only need these two things:

Of course, you aren’t restricted to one type of pencil. You can alternate between different pencils according to the grading you’re most confident in, whether it’s 2B or 2F. 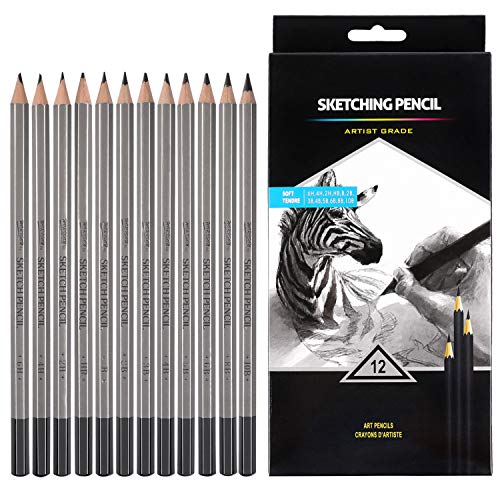 Begin by drawing two circles next to each other on the paper. The first one should be in the middle, and it should just be a little bigger than the other one. This will make up the dog’s body.

Remember: the two circles don’t have to be perfect. Don’t agonize over making a perfect curve. It’s fine to make some messy strokes.

Yorkies are known for their tiny, mini-sized builds, which stand in stark contrast next to Huskies or Golden Retrievers. If you set the two circles far apart, the body of the Yorkie will become too far-stretched. This is why it’s important to make sure that the two circles are close to each other.

Follow by drawing a circle that’s medium in size. Position it right above the medium circle.

Make sure that the head isn’t too small nor too big. To achieve perfect proportions, try to make the head as big as the second circle.

Draw two intersecting lines inside the head: one vertical, one horizontal. Make sure to slightly curve the lines. That way, they’ll contour the head.

Then, finish off by drawing a small circle inside the lower half of the head. This circle will outline the Yorkie’s muzzle.

Much like a Husky, a Yorkie’s ears are small, angular, and erect. To portray this look, draw two small triangles on top of the dog’s heads. These triangles will serve as the Yorkie’s ears.

Make sure to make the triangle’s sides slightly curved to one side. By doing that, you’ll avoid giving the head a flat, lifeless look.

Draw a line connecting the two circles together. By drawing this line, you’ll connect the Yorkie’s body. Now, things will start to look less abstract.

To top it off, draw a tail. You can draw a small, curved line, or something more pronounced.

If the dog is wagging his tail, the line will adopt a defined curve. If it’s tucked in, then it’ll be less prominent and straight.

Now, it’s time to draw the dog’s legs. Draw four short lines beneath the two circles. Make sure to bend the lines slightly to portray the appearance of joints.

Don’t forget to include the feet at the bottom of the legs. To outline them, draw two short, small lines.

Although small, Yorkies still manage to adopt the bossy and feisty attitude of terriers. Don’t be afraid to give your dog a daring glare.

Use the outline to figure out the correct placement of the eyes. When you do, draw two small circles. Then, draw a tiny circle in each eye. Make sure that these circles are tiny, as this will emphasize your dog’s glare.

Finally, draw a pupil by drawing two smaller circles inside the eye. These circles should be a little off to the side.

Shade all of the eye area except for the glare. This will help make it stand out more. You can finally add some extra strokes around the eyes for some detail.

On the top half of the muzzle, draw a triangle upside down. Then you can smooth out its corners into curves. It’ll automatically start to resemble an oval shape. This will serve as the dog’s nose.

After achieving a satisfactory look, slightly darken the top of it. Then, add two small circles to each side and shade them. These will serve as the nostrils.

You’ve already got the outline for the muzzle done. However, you need your sketch to resemble an actual muzzle, which is why you have to mark the paper with some quick, short strokes. Together, these strokes will resemble the hair covering the dog’s muzzle.

The hair at the top of the muzzle should be thick. It should almost cover the eye. The bottom, however, should be wide and short.

Begin by making more strokes around the head of the dog. Like the ones before them, they should be short and quick. By doing this, you’ll accurately portray the appearance of Yorkies, which are known for growing long hair instead of fur.

Make sure to draw these strokes along the dog’s ears too, as well as his chin. You could choose to shorten the chin hairs, as many owners in real life neatly trim that area.

To finally finish things off, you should draw fur around the whole of Yorkie’s body. Cover the outline of your sketch with it: the two circles, the legs, the feet.

When drawing the strokes around the legs, remember to leave some space. A Yorkie’s legs should be thinner than a Husky’s. However, they should also be thicker than a Chichuhaha’s.

Of course, practice makes perfect. If your drawing doesn’t match what you envisioned in your head, don’t give up just yet. Even the best artists had to start somewhere.