Dogs are carnivores and as such, they are designed to eat mostly raw meat. While there are some benefits to feeding a dog a raw diet, there can also be risks, including the possibility of getting worms from eating raw meat.

In this blog post, we’ll take a look at some of the most common types of worms that dogs can get from eating raw meat and what you can do to prevent them.

Can a Dog Get Worms from Eating Raw Meat?

Dogs can get worms from eating raw meat, but it’s not as common as you might think. The most common worms that dogs get from eating raw meat are roundworms and tapeworms. Raw meat can contain other dog parasites such as Toxoplasma gondii, Neospora caninum, and Sarcocystis cruzi.

Roundworms are usually found in the intestines of animals, and they can be passed to dogs when they eat contaminated feces. If a dog eats raw meat that contains roundworms, the worms will grow in the dog’s intestine and lay eggs.

These eggs are then passed in the dog’s stool and can contaminate your yard which can infect other dogs that eat it. 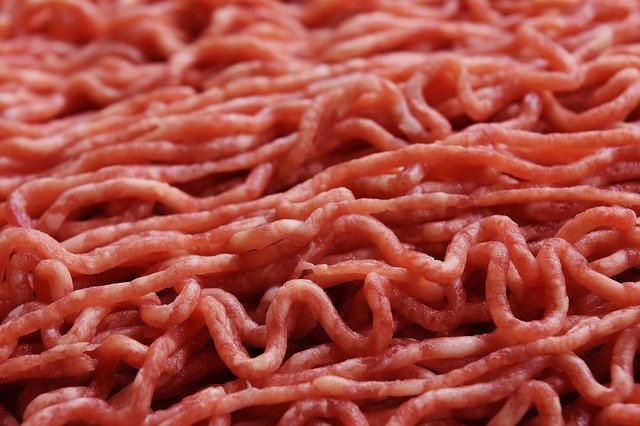 Several different parasites can infect dogs, but some are more common than others. The most common type of worm that dogs can get from eating raw meat is the roundworm. Other common parasites include tapeworms, Toxoplasma gondii, Neospora caninum, and Sarcocystis cruzi.

These parasites can all cause serious health problems in dogs if they are not treated.

Roundworms are parasitic nematodes that belong to the phylum Nematoda. They are among the most common parasites of humans and animals and can cause a variety of infections.

The best-known roundworm infection in dogs is toxocariasis, which is caused by the parasite Toxocara canis. This worm is transmitted to dogs through contact with contaminated soil or food products (e.g. raw meat).

It can cause the following health problems:

Other roundworm species that can infect dogs include Toxocara cati, Toxascaris leonina, and Baylisascaris procyonis. These worms are typically transmitted to dogs through the consumption of infected prey and can cause a variety of health problems including vomiting, diarrhea, and weight loss.

A tapeworm is a flat, segmented worm that lives in the intestines of animals. The most common type of tapeworm that infects dogs is called Echinococcus granulosus. This worm is transmitted to dogs when they eat infected fleas or hunt and eat small animals that are themselves infected with the larvae of the worm.

Signs that your dog may have a tapeworm include:

Other Non-Worm Parasites in Raw Meat

Toxoplasma gondii is a single-celled protozoan that can infect humans and animals. It is considered to be one of the most common parasites in the world, and it is estimated that up to one-third of the world’s population may be infected with the parasite.

Dogs can become infected with T. gondii through the consumption of infected meat, or by coming into contact with contaminated soil or feces. This parasite causes a condition known as toxoplasmosis. It may induce a variety of symptoms in dogs, including diarrhea, cough, labored breathing, jaundice, fever, seizures, and even death.

Neospora caninum is a single-celled protozoan that infects dogs, cats, and other animals. It is most commonly transmitted to dogs through the consumption of infected meat or food. This parasite can cause a variety of serious health problems in dogs, including:

Sarcocystis cruzi is a single-celled protozoan that infects dogs, cats, and other animals. It is most commonly transmitted to dogs through the consumption of infected meat.

This parasite can cause the following:

Symptoms of worm infection in dogs can include but are not limited to the following:

If you believe your dog may have a worm infection, it is important to take them to the veterinarian for proper diagnosis and treatment.

Left untreated, some types of worms can cause serious health problems in dogs.

A veterinarian would likely use a fecal flotation test to diagnose a worm infection in dogs. This is a simple and inexpensive procedure where a small sample of the dog’s feces is placed in a container of special fluid and then observed for the presence of worms or worm eggs under a microscope.

In addition to the fecal floating tests more in-depth methods can be used. Fecal wet mounts, concentration techniques, stool preservatives, and a fecal Baermann test are all methods for detecting worms in dogs.

Treatment for Worms from Raw Meat

The treatment of worm infection in dogs will vary depending on the type of worms involved.

Commonly, roundworms are treated with an oral medication such as fenbendazole, milbemycin, moxidectin, piperazine, or pyrantel.

Tapeworms are treated with praziquantel, either orally or via an injection. This will cause the tapeworm to dissolve within the intestinal tract, usually without adverse symptoms.

Treatment for Other Parasites in Raw Meat

Treatment options for canine neosporosis are limited and are generally not curative (source). Your vet will likely use Clindamycin or Trimethoprim sulfadiazine to control symptoms. Dogs can die from neosporosis with and without treatment.

Most cases of Sarcocystis infection in dogs clear up by themselves, but anti-inflammatory drugs can help reduce pain and swelling. Your vet may prescribe anti-parasitic medicines or antimicrobial drugs if the infection is severe.

In most cases, other therapies to remove the cysts have been ineffective.

Your veterinarian will be able to prescribe the appropriate medication for your dog based on the type of worms or parasites present. In some cases, multiple dewormings may be necessary to eliminate the worm population.

Additionally, it is important to practice good hygiene and cleanliness around your pet to help prevent re-infection.

There are a few ways to help prevent your dog from picking up worms when they eat raw meat.

By following these simple steps, you can help keep your furry friend healthy and free from worms!

A dog can get worms from eating raw meat, but there are steps you can take to help prevent it.

Always choose the freshest meats and freeze them for 1-3 days before serving.

Be sure to practice good hygiene and keep your dog’s food prep area clean.

If you suspect your dog has a worm infection, take them to the vet for proper diagnosis and treatment.