How Much Does A Pet Groomer Make An Hour?

Pet Groomers can expect to make between $14 an hour on the low end for pet bathers up to $45 per hour plus health benefits on the high end for high end retail stores and salons.

To answer this question let’s dive deep into Colorado. To pull real data, let’s use Craiglist. Keep in mind that these screenshots were taken as of June 2020.

First up we have a dog grooming job in Morrison, Colorado. Morrison could be considered a far out exurb of Denver. It’s a small tourist town downtown but the surrounding area is where a lot of suburban folks of Denver live.

This particular job is working for a grooming salon. We’ll cover the differences between working in retail (e.g. Petco or Petsmart) vs. a grooming salon vs. being an independent dog groomer below.

So a dog bather in Morrison, Colorado can make $14 per hour. Groomers get 50% commission plus tips. Even though the name of the salon isn’t mentioned they do give their address. It’s Purrfect Paws.

We couldn’t find their prices so instead we’re using the prices from MyDenverpet.com.

Grooming costs are based on the size of your dog, at least at Purrfect Pets but Mydenverpet bases it off breed.

For a small Shih-tzu or Yorkie expect to pay about $65.

We found another pet salon listing in another suburb of Denver. Again they pay about 45% commission plus tips. Again, doing the math with assumptions above you can expect to make about $15-17 per hour for small dogs and about $20-25 per hour for larger dogs.

Next we found an upscale retail listing (pet store) where they are paying 60% commissions. Their groomers average about $31.50 to $45 per hour. Plus they pay for a good chunk of your health insurance. 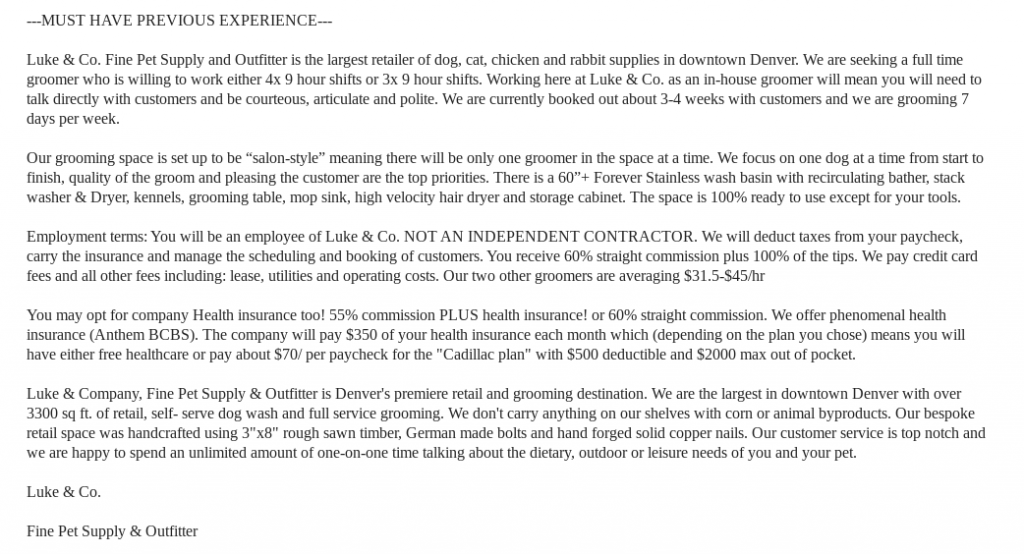 Retail vs Freelance vs Salon Groomer

You can also be your own business as an independent contractor. See our section below on setting up a mobile dog grooming business.

Lastly there are salon groomers. Lots of salons, including those for people, use this model where you essentially rent your grooming space for the salon owner. They pay on commission plus tips, usually around 40-60% commission rates.

How Much Do Independent Or Self-employed Dog Groomers Make?

This depends on whether you work for another business or for your own business.

A independent contractor at a salon or retail store still makes about 40 – 50% commissions plus tips. Depending on what the store charges that comes out to $15/hr up to $45 per hour.

If you own your own business things change. You keep 100% of the grooming price but you have to reduce it by your expenses, mostly marketing and your mobile dog setup or store.

According to MSNBC most self-employed groomers make between $25-$30 per hour and bring in $100,000 a year before expenses.

How Much Does A Mobile Dog Groomer Make?

Similar to self-employed dog groomers, a mobile dog groomers make between $25 – $45 per hour depending on the size of the dog’s groomed. Based on our calculations below a Mobile Dog groomer can expect to make about $31.70 per hour ($63,480 per year) after expenses.

First as researched above, the average dog grooming job is about $60 for small dogs and about $90 for large dogs in the Denver area. We like to use Denver for two reasons – we live there and it’s a medium priced city so if you include rural areas you get an idea of what you can expect around the country.

Let’s say you’re a great groomer and you’re efficient with driving so you can groom one dog every 2 hours.

Let’s also say you do a good mix of small and large dogs so your average grooming fee is in the middle of both – $75.

That’s $37.50 per hour on average which matches up with what we quoted above.

That’s before expenses. Let’s move on to those next.

The main expenses for your mobile dog grooming business, assuming you run it alone, are the cost of the vehicle plus maintenance and insurance. In addition there’s the cost of marketing.

Next let’s dive deep into expenses. 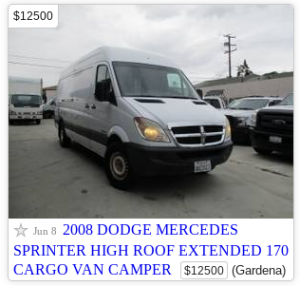 Then expect to pay about $1,000 to $5,000 to either paint or wrap your van with your businesses logo and artwork. You can get an online designer via Fiverr.com and other online marketplaces to design your logo and artwork for $60 to $300 and up.

Expect maintenance of the van to be about $1,000 a year. That’ll be too high in some years and too low in others but should average out to about that. Commercial auto insurance will be about $900 – $1200 per year.

Health insurance for yourself will be about $400 per month.

Business insurance for your pet business will be about $500 per year for general liability insurance.

Also, assume you pay $1,000 up front for the gear needed to outfit your van for dog groomer and have it installed in a way where it stays put while driving and it’s easy to use.

So your total expenses are $960 per month.